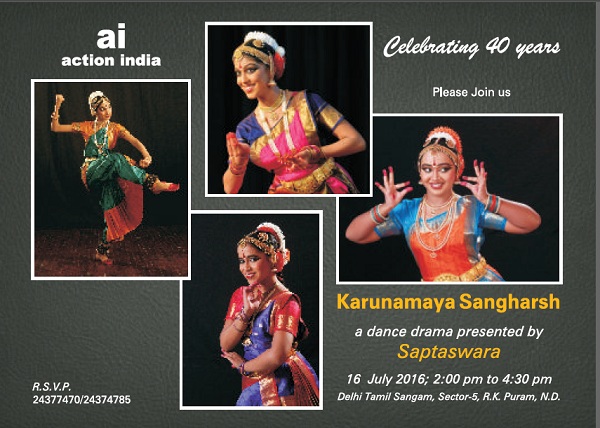 Action India is celebrating its 40 years of inception and work this year. To commemorate the occasion, a dance drama is being planned for the youth and adolescents belonging to some under privileged communities in Delhi with whom Action India is associated, through their various programs. Action India  has been working with a feminist ideology and the youth program grew out of it organically around 1992.The program is now 24 years old—–in the prime of youth!

Through the event, we are also proposing to invite all the staff members (past and present) who have been associated with the youth program of Action India. They have contributed their expertise, experiences and years to the organization and should be acknowledged for the same. After all, they are an important part of 40 year’s journey of Action India and this event would enable the present generation of youth to connect with these staff members.

Another feature is that the dance drama will be performed by a set of artists, who are young adults themselves, that is, a program for the youth by the youth! The duration of the show will be 90 minutes and the narration will be in Hindi.

What is the theme?

Karunaamay Sangharsh, the title of the dance drama literally translates as ‘compassionate struggle’. The dance drama revolves around some incidents and stories from Goutam Buddha’s life. In his quest for happiness and peace, Goutam Buddha adopted and advocated the middle path. This translated in real terms means that one can achieve understanding and/or solutions to various issues using dialogue and negotiation rather than violence and conflict. This message is very pertinent to young people even today. Therefore, we have chosen Goutam Buddha as our central character to carry forward some values and messages.

While Goutam Buddha undertook his journey to seek some answers, there were others around the same time and era who were struggling with different issues in life. Stories related to Buddha’s teachings are narrated by way of Jataka tales where the characters are mostly animals. Some stories focussing on individuals like Angulimal, Vasanthasena and so on are also popular, but they usually revolve around the lives of men.

For the purpose of this dance drama, we have chosen a few lesser known stories which are women oriented. These women came from different walks of life (royalty, traders’ community, courtesans and commoners). All these women, at some point or another, had come in contact with Goutam Buddha, confronted him and/ or got influenced by his teachings. Through these stories we want to highlight messages like equality between genders, dignity and respect for women, creating a separate space for women and having a choice in determining one’s future.

Who are the artists?

The artists who will perform the dance drama are all students of Guru Smt. Kanaka Sudhakar, a Bharatanatyam and Kuchipudi exponent based in west Delhi.  These students have formed a group called the “Sapta swaraas”. They have been learning the Kalakshetra form of Bharatanatyam from their Guru for the past 10-12 years. They have given performances in Delhi and outside at various socio-religious platforms and competitions. In fact, three members of this group were invited by Action India to perform on the occasion of SAARC day of the girl child at Baal Bhavan on 7th December, 2012.

Also, these students are either pursuing or finished their degree in dance from the Akhil Bhartiya Gandharva Mahavidhyalaya. Presently, two of them are in college, two have just finished school and one of them is a student of class XII. They are in the age group of 17-20 years.

For the purpose of the present event, five of these group members have come together to choreograph and perform the dance drama, all on their own without the guidance or help from their Guru. They regard this as an opportunity to use their dance skills to convey some socially relevant messages in an artistic, yet relatable way.

The artists of ‘Sapta swaraas’ group are as follows:

Keeping in mind the familiarity of the auditorium for the artists, the sound and light systems, seating capacity, cost and location of the place; we have selected the auditorium inside the ‘Delhi Tamil Sangam’ at sector-5, R. K Puram, New- Delhi.